Capital - Owner and his fellow clan members receive a general 10% defense bonus. Owner also receives 5000 cash each tick and has access to a satellite, which causes the 'Infiltrate' operation to succeed 100%.

Powerstation - Owner controls the powerstation and can turn it off and on. When on generates 2500 power each tick for each town.

When a government location is captured the troops that survived the attack will automatically be stationed at the location. When you go to the location overview a couple of options are available. 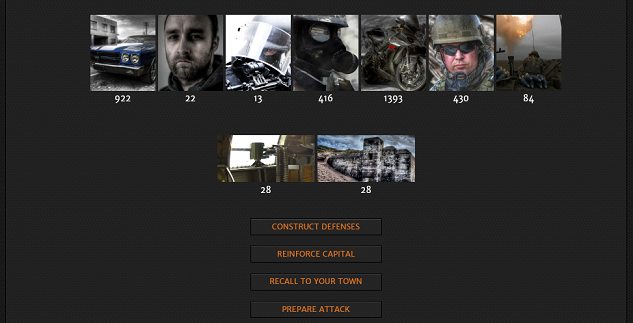 
Each government location is protected by 2 type of defensive structures.

When you are in control of a government location, you can construct new towers and bunkers.

Be noticed that there is a limit of maximum 40 towers and 10 bunkers that can be build on each location.


When you are in control of a government location you can reinforce and recall troops. This works the same way as normal only both will take traveltime.


When you own a government location, and you have troops stationed there, you can prepare an attack with those troops. To target another town, just fill in the townname of the town you wish to attack and press the send button.

When you wish to attack another government location you need to use the following numbers as your 'target' to send out your convoy.

preparing an attack convoy from Missile silo A to attack the Capital.

All cost and traveltime will be calculated as normal.